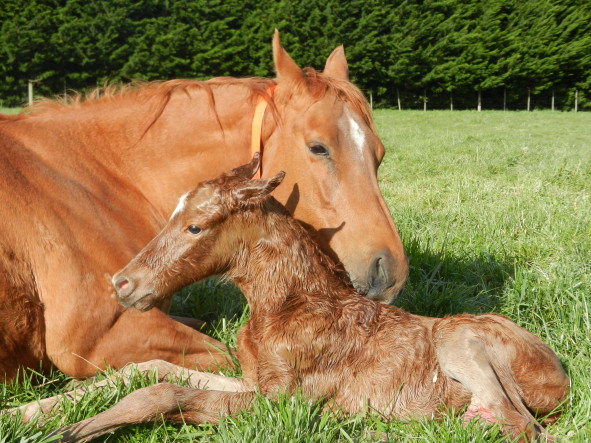 For most of us involved in the breeding industry spring time brings excitement and a little trepidation at the prospect of new foals to be delivered. The sight of a two week old foal running beside its mother in a grassy paddock on a brisk sunny morning fills most of us with delight. But as those involved in the business end of the industry know, it has taken a considerable amount of care and attention to get to that stage.

Thankfully in the majority of cases foaling is usually a straight forward event. In a small number of instances problems occur and this is where quick thinking and experience is vital.

The foaling process is divided in to three stages which we will consider in turn but firstly lets deal with the changes leading up to foaling. While most mares develop these changes, when they develop and to what degree they develop varies considerably from mare to mare and also depends on how many foals the mare has had.

During the last month of pregnancy the udder usually enlarges, often swelling at night and subsiding during the day. This also involves the upper part of the teat filling as foaling gets closer, and then within the last week the lower portion of the teat fills.

Over the last 2-3 weeks there will be a progressive relaxation of the gluteal and pelvic muscles which may not always be evident but can often be discerned as a hollowing either side of the base of the tail. Finally waxing (appearance of honey like drops of colostrum on the ends of the teats) can appear 12 – 48 hours before foaling. Around the same time the vulva itself will relax and elongate.

Some mares will drip or even flow milk prior to foaling. If this happens there is a real risk the foal will get insufficient colostrum once born. This colostrum is essential for the future well being of the foal. In this case it is often safer to milk the mare out and freeze the colostrum so that it can later be given to the foal. In this instance or any instance where there is a suggestion the foal may be colostrum deprived, it is always advisable to check the foals IGG status. This can be done with a blood test 24 hours after foaling.

This stage is primarily concerned with the foal realigning itself within the womb ready for birth. During pregnancy the foal lies upside down in the mare’s abdomen with its head and forelegs flexed. In order to be born the foal needs to extend its head and forelegs and roll onto its side. While this is happening the mare’s cervix is relaxing and some uterine contractions begin.

Outwardly there may be little evidence of this stage, or a mix of the following – restlessness, to varying degrees of colic, sweating, frequent urination, tail switching, removing themselves from the mob.

In a small number of cases these colicky signs can be quite pronounced. If severe they warrant veterinary intervention to ensure there is nothing else responsible for the pain.

The first stage of labour lasts usually a few hours and often up to twelve hours.

This stage is short (20-30 minutes) and marked by powerful contractions which normally take place with the mare lying down. These contractions often occur in groups of 3 or 4 with a few minutes rest in between. The mare will often get up to reposition the foal and then lie down again.

Within a few minutes the white translucent amnion should appear through the vulva with one or two hooves apparent inside it. Always ensure the soles of the hooves are facing downward. The foal’s nose should follow soon after the fetlocks have come through. As the foal continues to emerge, if his hooves haven’t broken through the amnion it is advisable to tear it open to enable the foal to breathe. Once the hips of the foal are out the mare will usually lie and rest, allowing essential transfer of blood from the placenta to the foal.

The three usual tight or sticking points for the passage of the foal are when the head comes through the vulva, when the shoulders and then the hips pass through the pelvis.

At some time the mare or foal will attempt to get up and in doing so break the umbilical cord. The cord should not be severed prematurely. 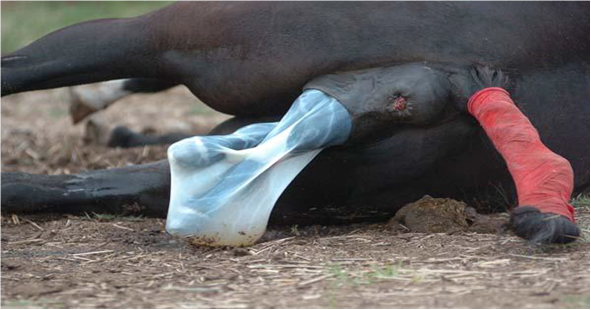 This stage involves the expulsion of the placenta and can take from 30 minutes to 3 hours. Some mares may take considerably longer but in our view anything in excess of 3 hours should be considered abnormal and warrants veterinary attention.

It is important that the placenta is passed whole and intact, as any remnants left behind can lead to uterine infection and possible infertility. While it is inadvisable to attempt to pull the placenta, it is useful to tie it into a knot above the mare’s hocks. This creates some gentle tension and reduces the likelihood of the mare stepping on it and tearing it.

Once passed it is also useful to examine it to ensure it is complete and to assess the thickness and colouration. This can give some clues as to whether there may have been a pre-existing placentitis. This is important to assess whether the foal, mare or both may need follow up treatment.

The great majority of foalings occur in night time hours and so go unobserved. Consequently only the very committed or those intimately involved in the industry get to see enough of them to be considered experienced at foaling down mares.

As stated previously most mares foal normally and are not a cause for concern. Occasionally however things do go amiss, usually a malpresentation of the foal. When this happens it is imperative that those attending know what to do. If those present do not have the skills to deal with it and someone needs to be called, it is essential the mare is prevented from straining until they arrive. If not the situation can be compounded by the mare straining and jamming the foal back into her pelvis, so that it becomes difficult to impossible to correct any malpresentation. We find the best way to prevent the mare straining while waiting for assistance is to force her to her feet and to keep her walking.

If there is any suspicion of a malpresentation it is always advisable to check rather than just let things progress. After thoroughly disinfecting your arm and then lubricating it (a soapy lather will suffice), feel for the presence of two front feet (facing down) and a nose.

In instances of malpresentation where the foal has become wedged in the pelvis we usually require the mare to be brought to the clinic. This enables us to anaesthetize the mare and elevate her hindquarters with an overhead gantry – this in turn allows the foal to be pushed back out of the pelvis and then allow any malpresentation to be corrected.

Apart from foetal malpresentations very occasionally one will be presented with a “redbag” delivery. This occurs when there has been premature separation of the mare’s placenta. Consequently the first thing to appear through the vulva is the placenta (redbag) and not the transparent amnion. It is vital that this situation is recognized and the placenta opened quickly with a sharp instrument as it is quite tough. Within the placenta will then be found the amnion and the foal’s feet and head. From there the foal can be delivered normally. This all needs to be done quickly as the foal is no longer getting its oxygen from the placenta given that it has separated from the uterus, and hence there is some risk of suffocation. 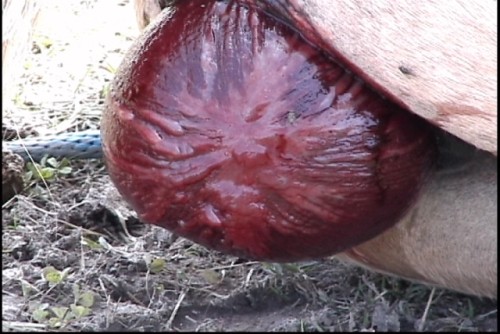 In conclusion if owners have any concerns about foaling down their mares we would encourage them to send them to a facility that has the appropriate skills and is close to a veterinary facility with equine expertise. 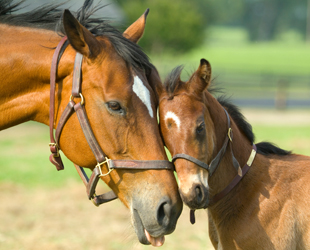