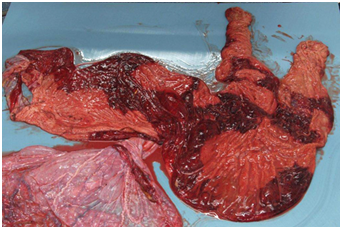 Obvious discolouration due to severe placentitis.

Placentitis as the name suggests is an inflammation of the placenta. It is important as it is the single most important cause of  mid to late term abortion in mares and it occurs in 3 -8 % mares. These are almost always infectious in nature, and in 90% of cases the bacteria enter via the cervix, penetrating the cervical barrier and establishing themselves in the foetal membranes. The foetal membranes thicken, both in response to the infection  and due to the mare’s inflammatory response to the infection. This in turn causes the membranes to separate from the uterus which obviously decreases the supply of nutrients to the foetus.  While the foetus may not be directly infected, the inflammatory response can lead to uterine contractions and abortion.

It needs to be remembered that the final maturation of the foal takes place in the last week of pregnancy. If this does not take place then we are likely to have a non-viable foal. While it is true that in-utero stresses such as placentitis can bring this maturation process forward, conferring viability to the foal, it is also true that when this happens not all organs mature at the same rate. Consequently while these foals may be born early and be viable in theory, they require considerable neonatal support if that is to be the case.

In Tasmania the major cause of placentitis is from bacterial migration through the cervix. There are a few factors that may lead a mare to be at risk of this happening. Most common among these is poor vulval conformation which allows aspiration of air and bacteria into the vagina. This itself may be due to inherently poor conformation, but will also be seen in mares that are poor in condition, or as a consequence of advancing age. If the mare’s cervix has been damaged at previous foalings this may lead to it being unable to stay as tightly closed as is necessary, and thereby allow the passage of bacteria. Additionally for the cervix to remain tightly closed requires consistent and adequate levels of progesterone. Should these drop even only briefly this can lead to transitory relaxation of the cervix and entry of bacteria.

While most infections are ascending i.e. arrive at the placenta through the cervix, some arrive there from the blood stream and others are residual infections that were there at the time of conception, often lying dormant only to flare up at a later stage.

There are viral causes of placentitis, most notably Equine Herpes Virus ( EHV). Traditionally this has not been seen much in Tasmania but as the movement of mares across Bass Strait becomes far more common this will become increasingly more important. Like bacterial placentitis this leads to abortion or weak non-viable foals.

More recently, eating the body parts of various species of caterpillar has been shown to lead to abortion. Overseas this has involved the Eastern Tent Caterpillar and on mainland Australia the Processional Caterpillar. The syndrome has been variously described as equine amnionitis and foetal loss (EAFL) syndrome or mare reproductive loss syndrome (MRLS) At this point it has not been shown to occur in Tasmania.

Placentitis can be present for long periods of time with no clinical symptoms. When signs are evident they consist of premature bagging up, dripping or running milk and vaginal discharge. These signs can be intermittent or wax and wane. Mostly when signs become evident it is indicative the condition has already been there for some time. This is then followed by abortion or birth of a small, weak foal. Some mares will just progress to abortion without any other premonitory signs.

Management and prevention of placentitis involves a number of factors. For viral abortion ( EHV ) this means vaccination of mares in their 5th, 7th and 9th months of pregnancy. For bacterial placentitis all mares should have their vulval conformation assessed and have a caslick procedure performed if indicated. Mares need to be kept in good but not fat condition as this impacts on vulval conformation.  Additionally minimal contamination breeding practice should always be observed to try to reduce the likelihood of infection at the time of mating.

Beyond this, at risk mares need to be identified and monitored closely. This usually means mares with a prior history of abortion, weak foals, or producing abnormal placentas at previous foalings. These mares should be closely observed for any of the signs mentioned above and additionally have regular ultrasound scans to check for placental thickening. This thickening occurs secondary to the inflammation and oedema that develops with placentitis. 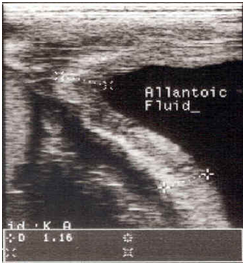 An example of thickening of the placenta

Treatment is generally instituted once the condition has been identified or alternatively may be instituted as a preventative measure in those mares considered to be at risk. It involves a three pronged approach of antibiotics for the infection, anti-inflammatories to reduce prostaglandin release by the uterus (this can lead to uterine contractions), and progesterone or its analogues (this helps to reduce prostaglandin release) This usually involves the administration of a potentiated sulphonamide as it has good broad spectrum activity and good placental absorption, flunixal, and altrenogest (synthetic progesterone) Depending on the individual situation this treatment may be maintained till birth or given at regular periods throughout the pregnancy.

A normal part of the post foaling procedure should always be to check the placenta. Even with apparently normal foals one will occasionally find abnormal placentae. This is valuable evidence that the foal, the mare or both may need further attention. Additionally it may alert you to consider this mare an “at risk” mare for future pregnancies.

The placenta has a shiny side with the blood vessels apparent (allantoic surface which faced the embryo) and a red velvety side ( chorionic surface which was adhered to the uterus ) When the mare passes the placenta it is usually inside out with allantoic surface outermost. It is to this side that the umbilical cord  is attached. While this side is outermost it pays to check the length of the cord and how many twists are in it, as cords of excessive length or with numerous twists have been associated with abortion. In thoroughbred mares cords should be less than 85 cm and have no more 5-6 twists.

An example of an excessively long umbilical cord with too many twists.

Having examined the cord, to examine the placenta further it helps to lay it out in a rough F shape with the chorionic side outermost. The hole in the placenta that the foal emerged through should be at the bottom of the vertical leg of the F. The vertical leg relates to the body of the uterus, the pregnant or gravid horn is the uppermost horizontal arm and the non-pregnant horn is the lowermost arm of the F. The placenta is then examined for completeness, consistent thickness and dark red colouration, any areas of paler colour or loss of villi should be viewed with suspicion. Obviously the presence of frank pus is abnormal. Finally it is advisable to weigh the placenta as inflamed placentae weigh more than normal ones due to to the oedema, and this may be the only abnormal finding in an apparently normal looking placenta. For thoroughbreds the upper limit of normal is about 6 kg. 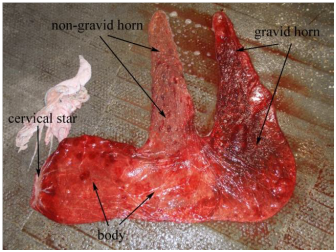 Placentitis in mares can be a significant problem and cause of wastage for horse owners.  While there is still a lot to be learnt research is advancing prevention, early detection and treatment methods. By implementing correct breeding protocols, horse owners and veterinarians can help reduce the risk of foal death